Aave, the rising money markets protocol, announced its token and governance upgrade Aavenomics: a formalized path to the decentralization and self-sustainability of the network.

Today Aave takes a leap towards decentralisation with our tokenomics upgrade: the Aavenomics Proposal.

Read our latest blog post for a synthesis of the Aavenomics Proposal here: https://t.co/cDavQH4Xxn pic.twitter.com/KNXaSsQDRM

The upgrade features a handful of key additions and changes to the growing lending protocol. First and foremost, Aave’s native token LEND will migrate to a new token AAVE at a rate of 100: 1 following approval from LEND holders via the Genesis Governance Poll. In turn, the total supply will shift down from 1.3B LEND down to 16M AAVE.

While 13 million AAVE will be claimable by LEND holders at the aforementioned rate, the remaining 3M AAVE will be allocated to the Aave Ecosystem Reserve – a bootstrapping fund for protocol incentives governed by AAVE tokenholders.  The protocol’s ecosystem reserve will be allocated between a handful of different incentives, including both the “Safety” and “Ecosystem” incentives. With that, the reserve’s Safety incentive allocation will be distributed to holders who deposit AAVE into the Safety Module (SM). The Safety Module acts as an insurance reserve for Aave users in the instance of a shortfall event and in return, will receive rewards along with a percentage of the protocol fees. With that, it’s important to note that Aave will be transitioning away from the current burn model in favor of this dividend-like token model. 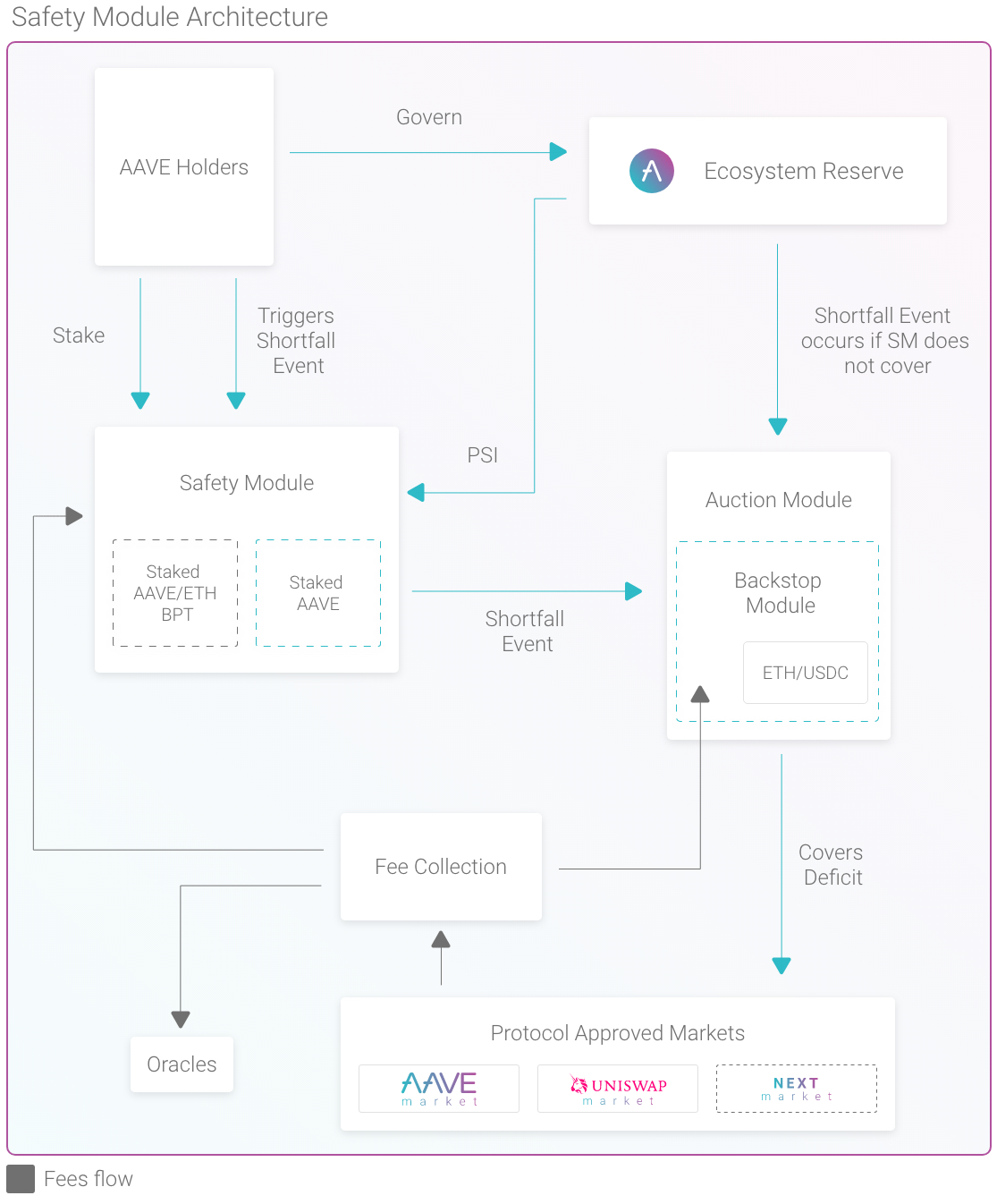 What’s interesting about the Safety Module is that it not only features vanilla AAVE in the module but it also leverages a Balancer pool to incentivize market liquidity. Naturally, the Balancer pool will also accrue BAL rewards and trading fees for Safety Module Stakers on top of the protocol’s native incentives – showcasing DeFi’s composability at its finest.

The other piece to the incentive puzzle is the introduction of Ecosystem Incentives. In line with the current trends in DeFi, Aave will be implementing a liquidity mining mechanism into the protocol. Therefore, users who supply or borrow assets from Aave will earn rewards.

Lastly, Aave governance may also elect to allocate a portion of the Ecosystem Incentives to fund or bootstrap applications building on the Aave ecosystem.

With the introduction of the Aave Ecosystem Reserve along with the team’s dedication towards decentralization and self-sustainability, Aave Governance is a critical piece to the Aavenomics upgrade.

The driving force behind Aave Governance is the introduction of Aave Improvement Proposals (AIPs) which represent modifications to the protocol that are ratified on-chain by AAVE tokenholders. An interesting design piece to this is that users who holder AAVE in cold storage or even staked via the Safety Module can use their token weight to vote on AIPs. Passive tokenholders also have the option to delegate their voting power to Aave Protocol Politicians.

Aave tokenholders will also play a role in adjusting Aave Policies, a set of governance defined rules that control the parameters behind the protocol, and individual money markets. As such, there are two main types of policies available for governance changes.

The first is Protocol Policies which dictate the overarching behavior of the Aave Protocol including risks, improvements, and incentives. The second is Market Policies which define the context and parameters behind each market within the protocol, like the Uniswap Money Market or the TokenSet Money Market. Changes to Market Policies may include adding or removing supported assets, adjusting loan-to-value ratios, or modifying interest rate models.

With Aave’s explosion into the DeFi ecosystem this year along with their ability to consistently innovate with new products, like credit delegation, the Aavenomics announcement is right on brand with what the team has built to date.

The protocol is not only introducing emerging trends prevalent in DeFi like yield farming but also leveraging the blooming composability available within Ethereum’s DeFi ecosystem. The introduction of the Aave Safety Module provides AAVE tokens with a claim on the protocol’s cash flows while also featuring a Balancer pool to maximize rewards.

While the exact timeline on the Aavenomics mainnet launch has been kept high-level, we can expect that this upgrade will serve as a driving catalyst for Aave’s next leg in growth similar to Kyber’s recent upgrade in early July or the announcement of Bancor V2.

If you’re interested in staying up to date, make sure to follow Aave on Twitter. For those looking to get involved in the discussions surrounding Aavenomics, make sure to join the official Discord!

Analyst at Bankless – one of the leading resources for open finance. Lucas is an active contributor to the DeFi ecosystem with appearances in other notable DeFi outlets including The Defiant and Our Network. He has years of experience working with dozens blockchain and token startups where he focused on token economics, marketing, and growth.

Recieve This Week in DeFi delivered every Friday directly to your inbox.